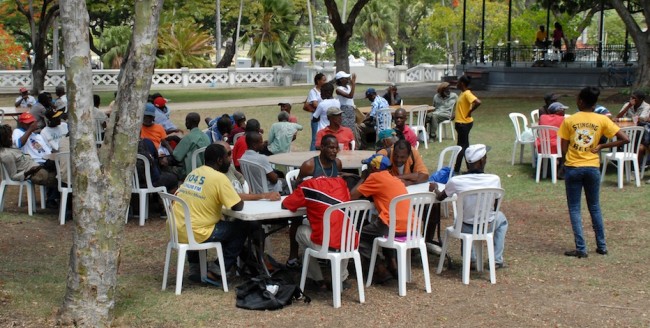 The health of vagrants in Barbados continues to be checked out.

Today the Vagrants and Homeless Society (BVHS) held its biennial health fair in Queen’s Park, the City, where the over 370 members were expected to show up for lunch and get a number of health checks and on the spot counseling.

Founder and chairman of the five-year-old charitable organization, Kemar Saffrey, told Barbados TODAY the fair was designed to ensure the health of the homeless and vagrants was “still good” even as some of them remain on the streets.

“So we have nurses and do HIV testing, we have diabetes tests, blood pressure and sugar tests,” he said, highlighting a few of the day’s activities.

“We have everything that you can think about that surrounds health to really get them healthy and make sure they are still healthy while living on the streets or while eating certain stuff. So that is our focus to make sure the health of the homeless is still good,” said Saffrey.

He did not say what steps were taken if some individuals were found to have ill health.

Besides the health aspect, Saffrey said the BVHS members, which are mostly males, were also given food and clothing, as well as barbering services.

They also had the opportunity to watch Flow TV.

Saffrey said he was pleased that the event continued to attract corporate Barbados who continued to “pour a lot into it”.

The fair attracted a number of sponsors including Chefette Restaurants, Sandalwood, S&R Rentals and Event planners, the Jolly Rogers, The Crane Hotel, Quality Auto Rentals, Champers Restaurant, The Courtyard by Marriot, among others.

“So we got tons of persons who gave. A lot of sponsors come on board just for this day,” said a delighted Saffrey. (MM)