Entertainers pitch in to help homeless 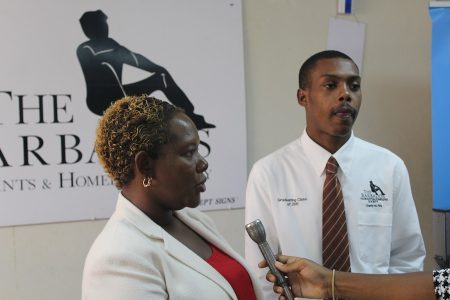 In what it described as a shocking development, the local charity which provides rehabilitative housing programme for some of the country’s vagrants is reporting an increase in the number of homeless women and children.

The Barbados Vagrants and Homeless Society (BVHS) is blaming the state of the economy for the rise, revealing today that many of the women who sought assistance “have been affected by the retrenchment”.

“The Barbados Vagrants and Homeless Society has seen an increase in the amount of women with children coming to the organization for help,” BVHS President Kemar Saffery said Wednesday at a press conference at the society’s headquarters on Tudor Street, the City.

The organization has collaborated with Courts and the Sandy Layne Charitable Trust to open a shelter to house six women and their children.

Saffery said the shelter was funded by the Sandy Layne Charitable Trust and furnished by Courts.

The project, which was launched just about a month ago, has already received it first tenants, with four women and their children moving in.

Tisha D’hayle, Marketing Officer of Unicomer (Barbados) Ltd, which trades as Courts, said her company was quick to support the cause by providing basic needs such as fridges, stoves and washing machines, and “it was handled with the utmost discretion”.

Courts already has a special relationship with the society as the company participates in the monthly feeding programmes.

Meantime, Saffery is appealing to corporate Barbados and the public at large to continue to support the society “so that women and children will not be on the street”.

“Children on the street poses a serious problem,” he said.