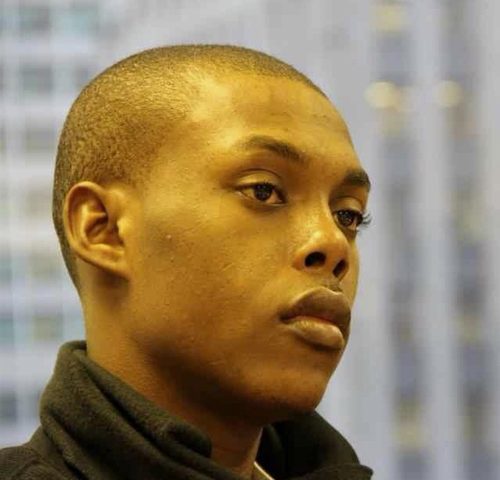 If you opened a magazine and saw a short paragraph summarizing who Kemar Saffrey is, what are some of the things it would say?

It would be about my life and the fact that my pass, or what school I attended didn’t determine the outcome of my life today. I would also like it to state that I am a strong-willed, hard-working man who fears God and puts Him first in all I do –– also a leader, champion and motivator of the youth and a young entrepreneur.

What four words best describe you?

What drives you and keeps you motivated? What are you passionate about?

I think what drives me is the ability to succeed at the task I undertake. I am known to undertake challenging, varied and difficult tasks. So seeing the success afterwards really motivates me and fuels my passion to keep going.

After leaving St George Secondary, you went into the world of work. Why did you take this route rather than further your education?

I went into the world of work because that’s what we as students were taught while going to school. You were famously told: “When you leave school, try and get a Government job.”

So I sought a job after school; though not in Government. I went to work at Max Entertainment at the time, and then moved on to Olympus Theatres. However, I knew that I never wanted to work for people; but I still had to survive; and I was on the verge of stealing or doing anything illegal.

In addition, St George gave Basic CXCs to students rather than General, and I knew in the long run I could not get a job with Basic; hence another reason for seeking employment rather than furthering my education. And it was not made known to us other institutions that would have assisted us with furthering our studies.

In 2009 you started the charity Barbados Vagrant And Homeless Society (BVHS). Was this always a dream of yours? And how did you know it was time to move your idea from conception to reality?

It was never my dream to start BVHS. I wanted to work, make money and do my thing at the time. However, at times I felt like I could have done something to assist the homeless, but I was more caught up in my lifestyle at the time than assisting the homeless.

It was only when I became a Christian on October 4, 2009, I felt the strong calling to assist the homeless full time. So I left the company which I had co-founded, which at that time was only about three months old, and began BVHS.

It was kind of hard to do, as we had just started, and all my time and effort had gone into the start-up of that company. However, I left and then BVHS was born a couple days later.

BVHS has been very successful in its seven years of operation. What are some of the hurdles you faced in the early years of the charity?

One of the major hurdles I faced were people. I had people telling me don’t help the homeless after I went public stating I was starting an organization to assist these unfortunate persons.

There were also people not wanting to assist with the organization; people saying I was too young. I realized many people were not welcoming when it came to the issue of homelessness.

Funding was a major concern, and also the homeless community was scattered. So it took me some time to find them and let them know what the organization was seeking to do for them.

The name of the charity speaks to two separate individuals: vagrants and the homeless. Can you explain what the difference between the two is?

People over the years associated the term vagrants with those living on the streets. However, not everyone on the streets is homeless, or a vagrant. A homeless person at BVHS would be considered as a person living in a shelter; on the street because of family issues, being unable to pay rent, because of loss of job; in dilapidated housing; living in a facility (hospital, rehab centre, and so on).

A vagrant is someone living on the street with ties to drugs, with no fixed place of abode, mentally unstable, using the street as his/her address, not having a care in the world, eating from the garbage bin or wherever he/she will find a meal.

Many Barbadians know that BVHS helps vagrants and homeless individuals, but some may not know how. Can you share the type of help or assistance the charity provides?

BVHS provides several programmes: At The Crossroads (ATC) deals with rehabilitation; On The Road Ministries (ORM) is about relocating vagrants and the homeless; Community Partnership For Homelessness (CPH) is a community partnership programme; and there are the Biannual Health Fairs, and weekly feeding. Some of our daily services include providing food (hampers), breakfast, clothing, counselling, haircuts and baths, and tutition in maths, English and life/coping skills. BVHS presently assists approximately 70 clients on a day-to-day basis.

In 2012, you received the Commonwealth Youth Award For Excellence In Development Work for the Caribbean region and also had the opportunity to be congratulated by Her Majesty Queen Elizabeth II. What was that experience like and how has this award impacted the charitable work you do?

The experience was a once-in-a-lifetime one. I was truly honoured to meet Her Majesty the Queen. I think I am one of the very few young persons in Barbados to have met, shake hands and briefly converse with her at the time.

I also met a number of other royalties, lords, ministers and Commonwealth ambassadors, and even was privileged to have dinner with all of them.

I have seen my life changed after meeting Her Majesty to the level of being an example and motivation for a lot of other people to follow their dreams. I am often called on to assist people in starting their dream businesses, to consult, to speak at events, seminars, churches, you name it.

It has also changed how some people view homelessness; and since our work has been rewarded and recognized, people believe more in the cause. I, however, wish to thank Mrs Marcia Brandon for nominating me for that award.

If you could be a superhero, which one would you be, and why?

I don’t have a superhero other than Jesus Christ, because He is the only one who has the ability to change the world.

If you could solve one global issue, which would it be?

Poverty. I believe I have solutions to solving poverty in Barbados.

You have started a few businesses over the years. Was it always a dream of yours to be an entrepreneur and what can you tell us about Saffrey’s Inc.?

It was always my dream to start my own businesses from the time I was at school. I sold things to get by, and washed cars while going to school for a living. When I left school,
I was still washing cars, and formed a security company at 17; then moved to cleaning; fruit stalls; then valet
services; and then the companies I own now.

Saffrey’s Inc., made up of several companies, aims to employ over 100 youth in key positions by giving the young persons businesses to manage.

You are the founder of Minors Club Barbados. What exactly does this “club” do, and what was the motivating factor behind its creation?

The Minors Club is a registered charity. The organization is designed to foster young leaders and entrepreneurs by offering workshops, seminars, financial and discount services, and numerous activities to engage and inspire them. As an added benefit, there will be a discount card that allows students to receive discounts from numerous establishments on selected school items.

In addition, the Minors Club facilitates meetings where members come together to talk about businesses and learn about leadership from a young age.

You spent two weeks in Sri Lanka attending
a major event there. What was it about and what role did you play?

The Commonwealth Secretariat covered some of the costs to the events since winning the Commonwealth Youth Development Award and the Prime Minister’s Office assisted also.

While there, we met with a number of businessmen from within the Commonwealth and represented Barbados at all levels of meetings. We were ambassadors for Barbados and carried the Flag and spoke highly of our country.

We learnt new aspects of entrepreneurship and were able to put to work the knowledge we gained on our return. This knowledge has helped me in my charity and businesses thus far. To my knowledge, we where the only Barbadian representatives there.

What advice would you give to any young person reading this feature as it relates to pursuing his or her dreams?

I would say follow your dreams no matter what, and believe in yourself. Put God above all you do and He will direct your path. Also, I would share that I changed my life to reflect who I wanted to become and, as a result, I gave up a number of things (partying and so forth) and started to follow biblical principles to create the successes I have today. God is my number one motivator and strength.

What’s next for Kemar? Where do you see yourself in five years?

I see myself on an island relaxing –– I am joking. I believe in five years I should be looking back at what I have built and the successes of BVHS and my companies. I also see myself growing spiritually and doing the work of the Lord at another level.

What do you enjoy doing in your downtime?

What do you love most about yourself?

I love the fact that I am Christ-motivated, and there is nothing I see that I can’t overcome. I also love that since my life reflects Christ, I am equipped to serve.

Whom would you like to say a special thanks to for contributing to your development and success?

I may not remember all who assisted me at this time, but I would like to thank everyone from the bottom of my heart.