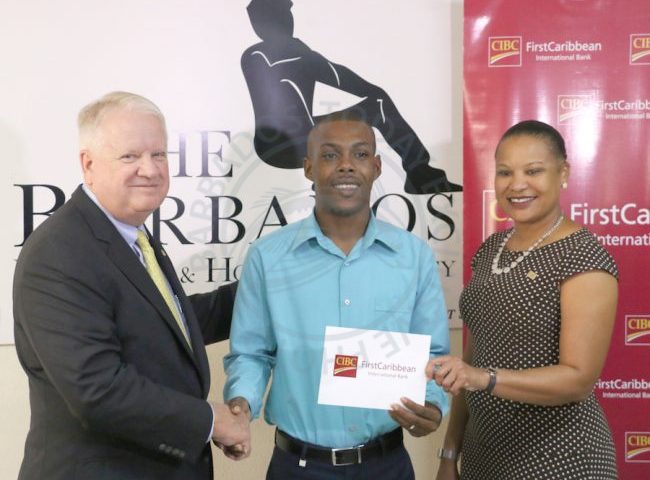 The Barbados Vagrants and Homeless Society (BVHS) has been given a much needed $20,000 to fund its programmes which offer hot meals to those living in destitution.

The cheque, presented by CIBC FirstCaribbean, is the first donation in a five-year commitment to provide a total of $100, 000 to the charity.

BVHS President Kemar Saffrey thanked the commercial bank for its generous donation, saying that it would provide invaluable assistance to the more than 440 people who depended on the organization’s services.

The BVHS sees approximately two to five new individuals weekly, according to Saffrey who also disclosed that there has been an increase in homeless youth seeking help.

“We are seeing more of the younger faces and less of the older folks now, so the age demographic has changed as time goes by,” he said.

The founder of the nine-year-old charity shared that the money from CIBC FirstCaribbean would go towards the BVHS feeding programme, which provides hot meals and dry goods to those living in shelters.

Chief Executive Officer of CIBC FirstCaribbean Gary Brown said the financial institution believed in demonstrating corporate social responsibility and has embedded in its employees, the need to contribute to their community.

“It is part of our culture at CIBC FirstCaribbean to be concerned about those around us, those that are in difficulty [who] have a lot less than those of us who have the opportunity to go to jobs every day and do something to earn a living. Certainly, in an organization like this that gets to work with folks who are in most desperate need, it is a great thing for us to do something like this,” he said.